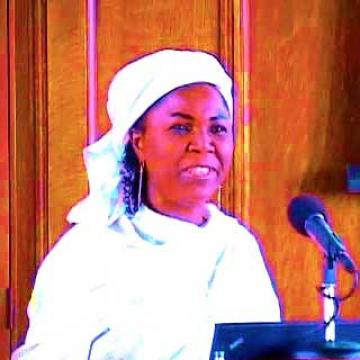 Hauwa Ibrahim is a Nigerian human rights lawyer and scholar at Harvard University. Prior to joining Harvard Divinity School, she was a Radcliffe Fellow and a jointly appointed Fellow to the Human Rights Program and the Islamic Legal Studies Programme. She was born in the rural village of Hinnah, in Gombe State, northern Nigeria, where she was ingrained with values that have strengthened her life’s journey and resolve. Moving from a simpler village life that included household chores such as carrying water and firewood to State supported girls education, she trained as an attorney with the goal of contributing to justice for those who may not have access. Now, an internationally-recognised human rights lawyer, she, with her teams has won numerous precedent setting appeals before the Islamic Shariah courts of Nigeria. She taps into that experience in her book ‘Practicing Shariah Law: Seven Strategies for Achieving Justice in Shariah Courts’, which provides real-world insights into the intricacies of Shariah law. She is acutely aware of the importance of education in empowering women and in defending those facing the greatest deprivation. Poverty and illiteracy go hand-in-hand – and fundamentalism feeds on ignorance. Brought up as a Muslim herself, she works tirelessly to fight against religious fundamentalism.

For her work, she has been honoured with awards such as the European Parliament 2005 Sakharov Prize for Freedom of Thought, which honours individuals or organisations for their efforts on behalf of human rights and freedoms, as well as the Cavaliere Award, the highest Human Rights Award from the Italian Government. In addition, she has been awarded Honorary Doctorate of Philosophy degrees at: Carl von Ossietzky University, Oldenburg, Germany, and Godwin University College, Honorary Doctorate in Human Letters, CT, USA. She has been appointed as a visiting professor in colleges and universities in Europe and the USA: Visiting Professor Harvard University, Visiting Lecturer Saint Louis University School of Law, Stonehill College, University of Pennsylvania School of Law, Carl von Ossietzky University, Oldenburg, Germany, College of William and Mary, and World Fellow at Yale University.