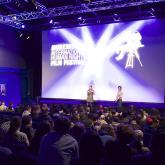 Your tears are not enough to defend human rights

Tinkling piano music and slow motion shots depicting the brutality of modern warfare are guaranteed to get weepy movie goers reaching for their tissues.

Andrea will be presenting a workshop at the 2018 Forum as part of the #RightsCulture track. It is one of many sessions exploring the impact of the arts and sport on human rights.

NIHRFF is Germany’s biggest and oldest human rights film festival. At the Forum Andrea teams up with Vienna’s this Human World to explore ways to run a successful rights-based film festival.

Andrea, who helps run the global Human Rights Film Network asks: “Emotion connects you to a story and an issue, but how do you elicit those emotions?

“Using classic sad piano music and slow motion shots, it is very easy to create emotion in film. It doesn’t take much to have everyone crying.

“But what does that do to the protagonist telling the stories? This can result in further victimisation. It is exploitative. It’s easy. And at the end of the day, it is not constructive.

“It’s easy to make everyone cry and feel super shocked with bodies torn apart and intestines hanging out.

“I have seen all those images and it is not necessarily productive. It doesn’t make you think and reflect on your role. It tends to numb. With crying it is the same thing.

“Everybody loves to have a good cry and feel they have done their part. They have witnessed this and been very sad for someone else. Then they go home having done their part.

“We would rather have films that make you think, rather than waken a shallow emotion… You have to block out their stereotypes. They have been able to survive and deal with those.”

Andrea believes engaging the YouTube generation should be a priority for human rights champions worldwide.

She says: “For our industry digital is both an opportunity and a challenge. Now everyone can make a film that technically is up to speed to be projected onto a big screen.

“That allows everyone to have their own voice. Making films is not as expensive and not as exclusive as it used to be. On the other hand, the market is flooded with stuff.”

Andrea concludes: “Bursting the bubble and reaching new audiences is the biggest challenge to all of us. Especially in the human rights field.

“It has got more and more difficult to get people into the cinema. They think you are not there. It’s the way they consume film that is becoming more challenging.

“The platform has changed. Short formats. It might be more infomercial. It is palatable, short and usually very emotional. But film still has a role in young people’s routine.

“It doesn’t matter where they watch: on their computer, mobile phone, or in a cinema. It is something they connect with…and that is a good thing.

“We put on all sorts of activities around the films. We have a huge schools programme. We try to programme films against expectations. Funny and a bit more risqué. More films and genres that break up that stereotype.

“Alongside films that are rather sad or depressing, we would have a film about burlesque theatre. It is a super political issue, but you wouldn’t necessarily expect to see it at a human rights film festival.”

To find out more about how cinema, the arts and sport can have a positive impact on the human rights situation today, follow the 2018 Forum’s #RightsCulture track which has film screenings, a panel debate on the power of art in promoting belonging, and much more.

And if you want to watch the very best human rights films, here is Andrea’s must-watch recommendations.