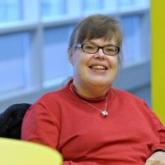 Women and girls with disabilities: how to ensure their voices are heard?

Helga Stevens, Member of the European Parliament, raises a crucial issue in her Fundamental Rights Forum blog post: outdated views often identify people with disabilities with their impairment but they are more than that. Every person with a disability, just like every person without a disability, is first and foremost a person. A human being.

We have different features that makes us unique but similar to others: it might be the colour of our skin or age, our religion or belief, but also our sexual orientation, gender and, indeed, our disability. No one only has one feature: each human being is a complex mixture of different characteristics and personality traits which render us who we are. And even though these features should be respected as part of our identity, societies have been constructed in a way that raises barriers, creating exclusion and leading to discrimination against us on the basis of our disability.

This is unfortunately particularly true for women with disabilities, which often have to face multiple and intersectional discrimination on the basis of their disability and gender. Women with disabilities remain in a clearly disadvantageous position within society and face intersectional discrimination in all areas of life, including, socio-economic disadvantages, social isolation, violence against women, forced sterilisation and abortion, lack of access to community services, low quality housing, institutionalisation, inadequate healthcare and denial of the opportunity to contribute and engage actively in society. This becomes even more startling if you do the maths: women with disabilities constitute 16% of the total population of women in Europe. This figure is based on the current female population of just below 250 million, so in the EU there are approximately 40 million women and girls with disabilities.

Despite the clear need for action, progresses in women’s rights and gender equality over the last decade have often not included the perspective of women and girls with disabilities. This is, for instance, reflected in the Concluding Observations from the United Nations Committee on the Rights of Persons with Disabilities (CRPD Committee), issued in September 2015, to the European Union:

Besides mainstreaming the rights of girls and women with disabilities within its work and advocating towards institutions, EDF also values the collaboration with other non-governmental organisations and civil society movements. For instance, I have recently been elected as a Board Member of the European Women’s Lobby (EWL), the largest European umbrella network of women’s associations. In this way, we can promote the rights of women and girls with disabilities in the major decisions and political priorities of the EWL.

This is a crucial moment for disability rights in Europe, and for the rights of girls and women with disabilities in particular. The review of the EU by the CRPD Committee has created momentum and provided the trigger to open discussions on how to improve the lives of people with disabilities on the ground. Moreover, 2016 also marks the ten-year anniversary of the Convention on the Rights of Persons with Disabilities. Thus it is an apt moment for worldwide reflection on the challenges and achievements of including people with disabilities in our society. EDF is fully committed to this mission and works daily to bring positive change and equality. In September 2016, the EU will have to report back to the CRPD Committee to explain which concrete actions have been taken to follow-up the Concluding Observations. On behalf of EDF, I am looking forward to this moment.

The EU has already taken actions to comply with the recommendations of the CRPD Committee and this should be praised. Yet, the situation of people with disabilities in Europe is far from perfect. This is particularly evident in the case of women and girls with disabilities. Yet, despite the current challenges and the awareness that meaningful improvements will not happen overnight, I am motivated now more than ever to collaborate with other NGOs, as well as EU institutions and agencies to personally contribute to the promotion and protection of the rights of people with disabilities across Europe.

Pirkko Mahlamäki is a member of EDF Board of Directors and the Finnish Disability Forum. As of June 2016, she was also elected as a member of the Board of the European Women’s Lobby./strong>