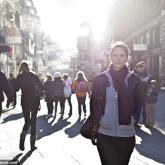 Where, after all, do universal rights begin?

For Eleanor Roosevelt it was “in small places, close to home.” The neighbourhood, the school, the office or factory.

Seventy years on after she delivered those words to the United Nations, marking the start of the Universal Declaration of Human Rights, they hold as true now as they did then.

In practical terms, for many this means the city. And many cities across Europe, and indeed the world, are taking this to heart.

Vienna, Barcelona, York, Utrecht. Just some of Europe’s cities that have declared themselves human rights cities. But what does this mean?

For the city of Utrecht’s Hans Sakkers it means creating “a space inspired by international values.”

“Local standards are challenged by international [human rights] standards,” he adds. And this helps cities to reflect and be critical about the reality in a city, benchmarked against international rights treaties.

He also believes human rights cities can empower different grassroots initiatives. They can “create a movement that brings people together,” instead of working in silos on their specific area of human rights such as privacy, poverty and health, homelessness, or facilities for people with disabilities, for example.

Becoming a human rights city, allow cities to hardwire rights into their policies, statements and programmes.

But when the City Council adopted its Human Rights City Declaration in 2014, it gave Vienna clearly defined strategies and a legal framework.

“This really enabled a human rights-based approach across all municipal departments and services of the city administration,” she adds.

In the world of human rights though, the work of cities and their role in delivering on rights often flies under the radar.

However, the Forum, can raise awareness on what local governements, and in particular human rights cities are doing.

You can learn more about cities in human rights at these sessions on 25 September: