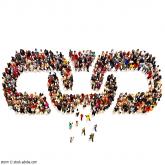 Towards a ‘whole-of-society’ approach to migrant inclusion

Social diversity—ethnic, linguistic, religious, ‘racial’—has long existed. Diverse societies have been formed by a range of factors. These include historic patterns of border making, regional and global migrations, the enslavement and forced transportation of people, and the prior presence of indigenous societies in colonised territories. Some societies with diverse populations have sought to treat all members fairly, while others have devolved into conflict. Between these two extremes exist a range of experiences; Europe’s experience fits within this history.

Although the experience of living with diversity is not new, as the world becomes ever more interconnected, the challenges have intensified. Genocide and civil war, forcible displacement and refugee migration, climate change and competition for natural resources, resurgent populism and violent extremism are just some of the most pressing emergencies facing the world today. Rather than disparate episodes, each stems, at least in part, from the denigration of human differences. When the effects of these denigrations spill across borders, the systematic exclusion of some people in one society or region become a challenge shared by others.

Confronted with such accounting, it is tempting to view diversity itself as the problem. But these crises and challenges are not caused by diversity. Diversity is simply a social fact—a sociological condition—with no inherent meaning until acted upon. How the people and institutions within society respond to diversity will determine how it performs—as an asset or a liability. Corrosive attitudes and policies breed corrosive practices and results.

Rooted in a positive and principled approach to diversity, pluralism offers a different choice.

Pluralism is an ethic of respect for diversity that asks us to recognise, value and respect human differences in order to widen the institutions, practices and experience of belonging. Diverse societies that choose pluralism accept rather than fear human differences.

Membership in society is determined by institutional choices and practices shaped by norms of inclusion, not by a person’s gender, appearance, beliefs or place of birth. In societies committed to pluralism, every person is free to express the multiple dimensions of identity that contribute to their uniqueness within a shared civic framework. When inclusive in orientation, these institutional and normative responses to diversity function as the ‘hardware’ and ‘software’ of pluralism. Like a computer, the two must work together and both are needed to make the system run.

An ethic of respect for diversity implies a minimum level of reciprocity among society’s constituent members. In successful diverse societies, the obligation to respect others is applied consistently, and all those who seek respect must also respect others.

Respect, in other words, is always a two-way street. An ethic of respect for diversity implies both mutual recognition and a valuing of the other as a legitimate and contributing member of society. In turn, the principle of membership implies three levels of belonging: all people in society are recognised as belonging, all people in society feel that they belong, and society belongs to every person.

Pluralism is a principled rather than a pragmatic response to diversity. For this reason, simple tolerance of difference—where members of an excluded group are free from harassment but not actively accepted or made welcome as equal contributors to society—satisfies neither the moral threshold of recognition, which implies both mutuality and respect, nor the moral aspiration of belonging, which assumes full access to and benefit from the institutions of citizenship.

From theory to practice

Looking at the experiences of migrants in Europe through a pluralism lens reminds us that a genuine two-way approach to inclusion, as promoted by the European Union, must move us away from top-down conceptions of integration and social cohesion.

Across the European Union, civil society actors are already demonstrating how this two-way approach can work in practice—by building bridges across diverse members of society and by working together to address shared social needs and to ensure no one is left aside. These society-led efforts are especially important in challenging political environments.

To increase impact, work is now needed to scale up these initiatives in ways that can inform policy, funding and practice.

Choosing pluralism is not easy. Impediments and obstacles exist in every society and some societies start with greater deficits than others. But pluralism is not an all-or-nothing proposition.

More inclusive habits of mind and institutional practices are forged by small gestures and big actions. Individuals and institutions can lead, civil societies can push governments, and governments can challenge citizens. Institution work and culture work, anchored in time and place, can improve how every society responds.

Who belongs? Ultimately, each society has the power to choose.