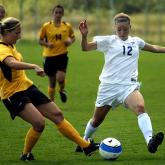 As this summer’s World Cup so clearly showed: sport is a great unifier – except when it isn’t.

The event provided wonderful examples of diverse teams coming together to bring home the top prize. Off the field, too, the competition sparked bonds in unexpected places. Sport at its most inspiring!

Sport at its most discouraging – and corrosive.

How do we best tap into sport’s enormous potential to promote inclusion and common values? How do we counter its nastiest by-products? Four Forum sessions explore different aspects of these vital questions.

Sports – a driver for promoting common values and human rights? looked at how to strengthen values and respect for rights through sport.

Around 3.4 billion people watched the 2018 FIFA World Cup. “This is why sport is such a ‘natural ally’ of human rights,” said Alison Biscoe of the Institute for Human Rights and Business: “It touches most people on the planet.”

Patrick Gasser, UEFA’s Head of Football and Social Responsibility, emphasised that UEFA, and organisations like his, contribute in multiple ways.

They dedicate valuable air time to 30-second spots on rights issues, for example. They use their leverage during bidding processes for large sporting events to push bidders to include human rights.

But he cautioned against expecting a ‘magical broomstick’ as nation states are primarily responsible for enforcing international human rights standards.

Franziska Temper, of the Vienna Institute for International Dialogue and Cooperation, spoke about how sport can promote cohesion at the micro level.

She gave the example of a football tournament in Kosovo that she organised. It brought together children whose village was literally split by a bridge. Before the tournament they never met.

Young football players with refugee and migrant backgrounds talked about how sport helped them integrate into their communities and gain a sense of belonging.

“When I play I feel strong!” said Frahnaz, who plays football with Kicken Ohne Grenzen. Abdul added: “Play Together Now is like my family.”

Tomorrow at the Forum EU-level policy makers will connect with people who have made sports work for the greater good. They will highlight examples of successfully using sports to empower migrants, refugees, people with disabilities and LGBTI people.

Want more? Grab your trainers and get puffing! Champions of inclusion: the power of sports for more inclusive and cohesive societies will showcase inclusive sports initiatives. Join mixed-gender games of frisbee and touch rugby or give blind football a shot. Both players and their coaches will be on hand to share their knowledge and personal stories.