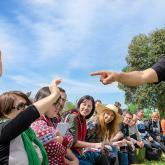 Populist parties across Europe have been eroding the support that mainstream political parties used to enjoy, as recent elections have shown. What if there was a pro-rights party that could tap into this democratic change?

Cue Volt. It’s a Europe-wide party that stands for a new and inclusive way of doing politics. It wants to bring real change to all European citizens.

Its co-founder Colombe Cahen-Salvador explains: “Europeans need to be mobilised and become active in the political life of their communities, while creating a sense of belonging to the EU.

“To affect change positively, citizens and residents need to be active at the local, national and European level; a special focus should be placed on the youth.”

This is where Volt steps in.

Active in 28 EU countries, it seeks to win back trust in the political process by involving Europeans in decision making in every country, in every city and every village, and enabling them to participate.

And it is proving to be successful.

“70% of our members were not involved in any political party before,” adds Cahen-Salvador. “Now all members are starting to think what they can do in their local community to bring about change… It’s a new way of doing politics.”

Volt campaigns on a platform of rights-based values like equality, liberty, justice and dignity. Recent initiatives have focused on gender equality, LGBTIQ rights and reforming the EU institutions to make them more democratic.

With political parties established in different countries, it also has its sights set on the 2019 elections in the European Parliament. It seeks to form the Parliament’s first united and transnational party.

They will be at the Forum 2018 where they will showcase what they are doing to mobilise Europeans and get them politically involved in the life of their communities.

Getting Europeans involved also features heavily in the work of Pulse of Europe who will also be at the Forum. They will bring the voices of citizens from their street meetings to the Forum.

An initiative by citizens for citizens, that spans many cities and countries across Europe, it holds regular pro-European demonstrations where people on the street are invited to express themselves either through an open microphone or be writing their thoughts for all to see.

“We need to show Europe is alive and not just laws and institutions. It’s much more than that,” says Pulse of Europe’s Nini Tsiklauri.

She believes if we don’t do something and get active, then the negative voices will speak louder and will be the only ones heard. People will feel they are the only ones talking about Europe. “We want to show we are visible,” she adds.

They have amassed crowds of up to 500 people from very diverse backgrounds, views and ages all sharing their passion for the universal values Europe holds dear. By organising such sessions, others can see how people believe in Europe and gain inspiration.

And this is just some of what Europe’s citizens have been saying about the EU:

“EU, because everyone is worth the same!” “An EU that sees diversity as a privilege and not as a threat”

Both sessions take place on 25 September.