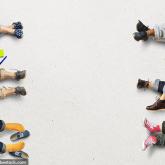 Introducing your creators with purpose #Ideathon2018

As someone who cares about rights, you're particularly open to hearing new voices and new ideas. But do you believe these new perspectives can change the world?

The 2018 Forum’s Ideathon shines a light on emerging creative talent. Our ten creatives in residence: artists, musicians and YouTube stars, are united by a shared passion for human rights.

They talk to audiences of millions. They tell stories with the power to make their followers laugh or cry and always think deeply about life.

The Ideathon challenges each of them find novel and inspiring ways to repackage and communicate ideas from the Forum. It is their opportunity to share their skills with other human rights champions.

Take musician Marina Satti, whose video for the song Mantissa has been viewed more than 33 million times on her YouTube channel.

Her father is a doctor from Sudan and her mother a chemical engineer from Crete. Marina grew up biracial in a largely homogeneous Greece.

She told America’s National Public Radio (NPR): “I was afraid that I would stick out, because I'm a little darker in the skin.

“And sometimes, I remember myself being shy, and I remember I didn't want my dad to come and pick me up from the school.”

But while studying in America, Marina felt able to properly express her dual heritage. She said: “It's a state of mind I got into there that I carried back with me to Greece.

“My dad had to come to Greece from Sudan to study and be who he is. And, me, I had to go to the States and embrace who I really am.”

Marina mixes Greek and Arabic folk music to powerful effect. She wrote Mantissa with friends and it became the song of the summer in Greece. She describes it as “the story of my life.”

The artist added: “Greek songs usually talk about being hurt, and being in love, but in a really negative way, like suffering, and there is no hope anywhere. Not this song. It's full of hope.

“It's hard out there. But we are good at hope.”

The other Ideathon creatives helping the Forum spread its message of hope include:

“A creative starting point embraces curiosity, takes us into the realm of metaphor, and provides new avenues for expression while bringing in new and often unheard voices.”

Max is a hip hop artist with a dedicated 100,000 subscribers on YouTube. He says: “We are different, we are special, what connects us is music.”

For his latest video, Max stands in a busy shopping centre, blindfolded, with open arms and signs saying: “I'm German, I'm not a racist, I trust you, trust me, give me a hug.”

He told German TV show Aktuelle Stunde: “Dealing with refugees is a sensitive topic. But what's wrong is exclusion and these hate slogans. It is simply an embarrassing picture of our country.”

Ramia has a passion for communication. She declares the main aim of her influential YouTube channel is “to normalise the fact of being a hijabi Muslim woman in Spanish society.”

YouTube appointed her a spokesperson for its Creators for Change campaign ‘Against Hatred And Radicalism: #SomosMás’.

Ramia’s online work is “my little window in the world to share things that may be interesting. Tips, experiences and other things in my everyday life, to learn, entertain and have fun.”

And one year later he revisited many of those he had seen on his travels for Politico after they had settled in Germany.

In his online report, Elio said: “Through it all, I couldn’t shake the thought that, had I been born in a different country, I could easily have been on the other side of the lens.”

The award-winning creative famed for a wide range of exhibitions, live shows and innovative, hi-tech projects.

YAK says: “My ambition is to give the public a means of expression that would be the equivalent for photography of what the smiley is for writing.”

Dr Loader’s campaigning organisation is concerned with the impact humans have on each other and the world they live in. Its films raise awareness about human rights and the environment.

Its website declares: “Caring about human rights, animals and the rest of our environment is a sign of compassion, rather than a political statement – it is proof of a dignified life.”

Illustrator Yeyei was born in Madrid in 1993. She has gained a worldwide reputation for using media ranging from acrylics to the latest digital technology and even music.

In a recent interview with Metal magazine, Yeyei explained the attraction of new, digital media. She said: “Social networks are useful.

“I do not think anyone who channels their work through the internet can deny its usefulness. They help us to share what we do and to make ourselves known.”

The Ideathon creatives will be supported by staff from the Public Interest Research Centre, guided by cartoonist and PIRC associate Ralph Underhill @cartoonralph. “Like all good communication, cartooning allows you to convey complex and challenging ideas in an open and accessible way”

All in all, over the three days of the Forum, the Ideathon promises to get creative and inspire us to rethink how best to take the Forum’s messages mainstream.