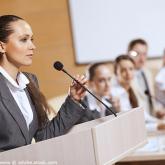 Now it’s time for your voice to be heard, as the 2018 Forum sparks an EU-wide conversation about the future of human rights.

Our partners at Debating Europe are helping facilitate this by involving their 3.5million-strong audience online. They pose the question: “Are human rights under threat in your country?”

The aim is to reach beyond the 600-plus delegates who will be attending the Vienna Forum from 25 to 27 September. And take it into every home across Europe.

Adam Nyman, director of Debating Europe, believes it is important to include a range of voices to spark a healthy discussion.

He says: “We haven’t got an agenda. We are non-partisan. We present both sides of the argument and leave it to our community to decide whether something is right or wrong.

“What we try and do is create thought-provoking articles and posts and debates and present facts that make people think.”

Adam continues: “The Forum is highly topical, given the nature of the political systems that are now starting to crop up across Europe.

“The growth of extreme right wing organisations undermines the basic rule of law, so having a conference on this scale look at human rights is important.”

He believes that the tone of debate has changed dramatically across Europe in recent years, making the Forum even more relevant today.

Adam says: “Straight out of Brexit, there was a hardening of tone. People’s tone changed enormously. They don’t hold back when we launch debates about migration.

“There is a big divide between those who are for and against. What was once taboo is no longer. We saw people crawl out of the woodwork after Brexit…they felt validated.

“And that happened across the whole of Europe. Our migration debates are interesting, but they sometimes make for uncomfortable reading. You see people with very hardline opinions.

“After Trump was elected, we saw a counter movement of people coalescing around the idea of Europe. Saying our fundamental rights are under threat.

“We have seen this in the tone of the debate and the number of people engaging in that debate. There is more back-and-forth and engagement. Which is healthy.”

Debating Europe is an online discussion platform, started in 2011 with the objective of engaging young European citizens in serious debates with policy makers.

Adam explains: “It’s a bottom-up approach. We have questions from our 3.5million unique users and take them to relevant policy-makers to answer. We want people to engage and discuss.”

Now it’s over to you. You can join the conversation at Debating Europe here.