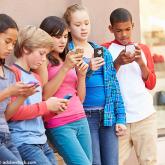 Growing pains: How big is your digital footprint?

Headlines often warn of the perils of cyberbullying, grooming, and the hours children spent glued to their digital devices. Less well known, but just as worrying, is their lack of privacy.

In the US, nearly all children aged 8 and under live in a home with some type of mobile device. They spend on average two-and-a-quarter hours a day with screen media, predominately mobile.

For children, the world online is not an optional extra. It is an intrinsic part of their world.

They hook up to the internet to study and learn. They go online to relax, to be entertained, to be informed and to socialise as they learn how to interact with their peers.

But the sites they visit, the apps they use, the online games they play, often keep track of everything they do and store vast quantities of personal information about their users, children.

It’s often the price they pay to just use the service.

Then there are the ever-growing array of connected toys and assistants which listen and record every interaction, often with minimal security.

“It is hard to overestimate the importance of digital devices in a child's life, but there must be a balance between what technology gives young people and what it takes away,” said Baroness Kidron, Chair of the 5Rights Foundation after launching their Disrupted Childhood report.

“Children require increased protection against the collection and use of their personal data by private corporations,” said the UN Special Rapporteur on Privacy, Joe Cannataci.

“Children are not really ready themselves to implement all these security and compliance tools. They know they should take care of that but they don’t really know why or how.

He also believes too many children are normalising privacy risks.

They are taking it for granted in their digital life. They think that as part of growing “they have to resign from privacy and the security they have so far … which is something not true.”

It is important to fight this and convince children to change their point of view, he added.

So what can be done?

“We should help the education system, we should work together with the families, with the teachers and with the schools.”

This sort of cooperation is still not as developed as would be expected.

That’s why the EDPS and national data protection authorities are working with schools and teachers.

They are introducing privacy and data protection into existing lesson plans. This allows teachers to educate children about privacy considerations in their everyday teaching.

Wojciech also doesn’t think changing the law will help much: “We have enough law; we have enough regulations right now.”

It is up to law enforcers, market regulators, public authorities and ministries to act.

As for companies, they understand the need to protect children. But they only do as much as is required by law, said Wojciech.

Very few are in fact involved in the education of children. That’s why it is important for companies and regulators to be involved in dialogue with educators.

“Data protection authorities, the regulators, the government would be absolutely blind without the everyday cooperation with the NGOs that are dealing with children.

“They really know how children operate.“

“Whatever [DPAs] have to do, we have to do in synergy with NGOs.”

It is clear, that concerted efforts are needed to improve privacy and data protection.

“With growing concerns over children’s online privacy and the commercial uses of their data, it is vital that children’s understandings of the digital environment, their digital skills and their capacity to consent are taken into account in designing services, regulation and policy,” said London School of Economics and Political Science's Professor Sonia Livingstone, who is leading research into children's data and privacy online.

To find out how to take this forward, the European Data Protection Supervisor will examine how digital technologies are having an impact on children’s privacy and personal data.

Their session takes place at the Forum on 25 September.