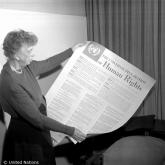 Do we really need another human rights forum?

Hard-won human rights are under threat. Populist movements stoke anti-immigration panic and xenophobia, while press freedom, freedom of speech and assembly are stifled.

A recent FRA report identified risks from terror laws, budget cuts, smear campaigns and even attacks on activists. Together they can undermine our sense of belonging.

The Fundamental Rights Forum will provide a safe and unique space to reinvigorate efforts to protect and promote our human rights.

Human rights are part and parcel of the EU’s founding principles. By listening to the voices of marginalised communities and by celebrating our differences, the Forum will present a clear roadmap for policymakers. And it will help forge new networks and new, sometimes unusual, coalitions all striving to create a rights-based culture throughout Europe.

More than 500 thought leaders from a variety of backgrounds will gather in Vienna this September to discuss and agree strategies to safeguard our rights and shape future policy.

Views may differ but the issues discussed will resonate with us all.

FRA Director Michael O’Flaherty says: “The EU’s own civil society is facing a pattern of threats and pressures in many parts of the EU.

“Addressing this unacceptable situation should be a high priority for policy makers at EU and national levels.”

He urges politician to avoid complacency, and instead: “to intensify their support for civil society efforts to protect, promote and fulfil human rights within the EU”.

The same report also warns that EU Member States must be careful to create new laws that reinforce, rather than weaken, human rights. It encourages an open dialogue between all stakeholders and references many of the threats already faced by human rights activists.

There is clearly a need for innovative ideas to better promote and protect our rights - the universal rights shared by all.

This is why we need the Fundamental Rights Forum.

From politicians to activists, YouTubers to experts, delegates at the Forum will debate and present best practices and policy suggestions that will ensure human rights are for all. By uniting existing human rights workers with inspirational people from business, sports and the arts the Forum can create a coalition of hope, and a programme of activity which stretches out for many years from now.

You can join the debate on social media, using the hashtags above, as well as #RightsForum18.