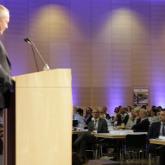 “Human rights cannot be viewed as an optional extra that can be sacrificed. They are the cornerstone of European identity; if we lose them we will lose Europe.”

“We have a crisis of fundamental rights in Europe but also the goodwill, energy and ideas to overcome it,” he added.

And over 100 of those ideas were distilled from discussions at the last Fundamental Rights Forum and then captured in the Chair’s Statement 2016.

“The first thing you said and first thing that the statement must capture is that we can do it,” said Michael O’Flaherty.

“Europe and its citizens are resilient. Our citizens are creative and energetic. Yes, they are angry but their anger is a righteous one.”

Could it be democracy under strain or the lack of trust in institutions? Or the pervasive inequality that many people face across Europe?

All threads running through discussions at the Forum 2016.

Yet another sense captured at the Forum 2016 was the power of young people in Europe.

That’s why they will form an important part of the Forum 2018. They will bring a fresh dynamic to the event. Many have organised their own open sessions, giving them a vital opportunity to shape future policies.

The Chair’s Statement 2016 contained a wealth of focused and innovative suggestions grouped along the main themes of 2016: refugee protection, inclusion and the digital age. Examples included:

The Agency committed to taking many of the suggestions up with EU Institutions and Member States.

They were outlined to both the EU Council’s Fundamental Rights Working Party (FREMP) and the European Parliament Committee Civil Liberties, Justice and Home Affairs (LIBE).

The proposals and commitments were also widely disseminated in national parliaments and among stakeholders.

Many have helped inform policies. Others have been taken up directly by FRA and will be much in evidence during the Forum 2018.

Take the case of FRA’s help in strengthening the roles of all fundamental and human rights stakeholders at national and EU levels.

Its report underlining the challenges facing civil society organisations has been widely discussed and followed at the international, EU and national level. It will also feed discussions during the European Commission’s Fundamental Rights Colloquium this autumn.

FRA has also committed to ensuring that its fundamental rights advice is listened to and acted on.

Here, for example, it has held training workshops to provide guidance on how the EU’s Fundamental Rights Charter could be taken on board nationally.

It has also helped train judges and police officers to firmly position the Charter in the minds of those who can make a difference to the people of Europe.

“We are tired of human rights being relegated to the corner.

“Human rights has to inform all public actions, not least in the socio-economic areas,” said Michael O’Flaherty in summing up during the last Forum.

That’s why the Forum 2018 yet again comes at an opportune moment as the European Parliament and Commission get ready to change.

The process that began in 2016 continues again as the doors open on 25 September.