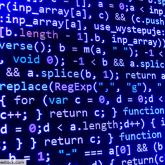 Being smart about artificial intelligence

When you last looked for holiday deals online, did a friendly digital face pop up on your screen to guide you through your options?

Bots – computer programs that perform automated tasks, but are made to be like humans – are everywhere.

AI is present in more aspects of our lives than we realise – and its use keeps growing.

Some uses are benign. Netflix nudging you to watch yet another dark Danish crime series? All based on an algorithm – coded commands that allow a computer to take input and make decisions.

But some AI uses may have profound effects on our societies. For example, it may determine how much you pay for insurance or whether you get offered a job.

AI certainly increases efficiency. It can also bring many other meaningful benefits.

For example, it has been shown to spot tumours better than radiologists. It also brought us voice recognition software, which enables people with visual impairments to quickly produce written texts.

The possibilities seem endless. Yet so do the risks.

So how do we capitalise on AI’s benefits while controlling its capacity for harm?

This was the central question during one of the Forum’s sessions.

Andrew Mawson, chief of child rights and business at UNICEF, acknowledged that simply “keeping up” with technological developments is a huge challenge.

European Parliament member Michał Boni noted that it is important to remember that “technology is for humans, and not the other way around”. He also emphasised that transparency is key.

FRA’s David Reichel pointed out that all fundamental rights are ultimately affected by AI, an issue the Agency is starting to look into.

Lorna McGregor, law professor and director of the Human Rights Centre at Essex University, added that it is important to investigate alternatives to AI – and not just simply “rely on it as a short cut”.

For example, new technology can greatly support independent living for people with disabilities. But this comes at a great cost: extensive access to sensitive personal data.

Jean-Yves Art, Microsoft‘s Senior Director for Strategic Partnerships, emphasised that it is vital for tech companies to hear the the many questions and concerns people have – and to involve many different actors in the discussions.

The discussion brought together speakers from diverse specialties. But they all agreed that an appropriate human rights framework exists to handle the many challenges that may arise.

“This is the encouraging message I will take back to my colleagues,” noted Jean-Yves.