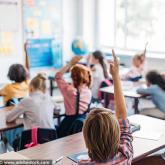 Back to school for free speech and tolerance

Education is wasted on the young, they say, but that belittles the tremendous role it plays in forming future citizens.

In today’s fractured society, we see intolerance growing and a lack of respect for diversity. Hate crimes frequently fill headlines as mosques and synagogues are torched, and migrants are attacked or killed.

And we see polarised views proliferating across traditional and online media, fuelled by fake news and misinformation.

“The best response to current challenges faced by democratic societies is the democratic engagement that allows people to develop mutual understanding of one and another as well as a shared set of civic values that can exist alongside their different beliefs,” says Council of Europe, Secretary General Thorbjørn Jagland.

“Reasoned debate. Dissent. Diverse and challenging viewpoints. These are the lifeblood of societies which are plural, dynamic, evolving.”

This is where schools come in.

They are increasingly viewed as the frontline of the battle to deal with threats and challenges to inclusive democratic societies.

And in schools, battles are being waged as access to quality education is being challenged. This is in part driven by the wider societal issues resulting from the economic crisis and the rise of intolerance and extremism.

Violence and bullying in schools also remain a big issue.

According to the WHO, in Europe suicide is the second leading cause of death among 15-29 year-olds, after road traffic accidents, with over 125 000 suicides committed each year.

For such reasons, the Council of Europe will soon launch their ‘Free to Speak, Safe to Learn’ campaign.

A bottom-up approach, it will showcase how schools, teachers and students from all over Europe are countering the challenges faced by democratic societies in Europe today.

“Schools and their practices will be informing policy making and not the other way round,” explains Snežana Samardžić-Marković, the Council of Europe’s Director General of Democracy.

It will also allow schools to learn from each other.

Already they have heard from around 2,500 schools across Europe and have collected about 500 practices. They reflect safe learning environments, where pupils speak freely, without fear or violence.

The campaign is aimed at those who think differently, explains Snežana. It is for those who would like to help themselves.

“It gives them a voice. It give them the tools. This multiplication will give the magic of change.

“It contributes to the improvement of the educational environment for students and for teachers too.”

It stands for the rights of children to inclusive, quality education.

“Education is not only about employability,” she adds.

“People are not born with democratic skills. The role of education in this is fundamental.”

The campaign will give students the values, attitudes, skills, knowledge and critical understanding they need for their personal development as active democratic citizens.

It will also and better equip them for work too.

It will allow them to voice their concerns and give their opinions. It will enable them to better tackle controversy, the potential for which is growing in schools.

Issues like evolution, history, LGBTI rights, or simply the food served in schools, are all examples of potential sources of controversy, as identity politics, diversity and the immediacy of social media kick in.

The campaign will look at critical thinking and how to spot propaganda and misinformation, as well as how to distinguish between real versus fake news.

Issues such as bullying, violence and discrimination in schools will also feature.

Another element of the campaign will be promoting healthy lifestyles and children’s wellbeing.

On 26 September, at the Forum the Council of Europe introduced its campaign to Forum participants.

The official launch will take place in Oslo from 14 to 16 November.