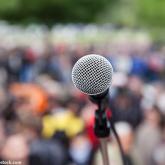 How do you get your message heard in today’s noisy world of communications?

With human rights systems under attack around the globe, it’s a vital issue for advocates to tackle.

A group of top communicators shared their best advice at the Fundamental Rights Forum 2018. For ease it has been distilled into 10 keys to effective human rights communication.

The keys reflect the main insights from discussions held at FRA throughout 2017 and 2018. These brought together diverse specialists from the private sector, politics, advertising, public relations, cognitive science, and advocacy, among others.

Some are time-tested classics. Get visual. Cut a long story short.

Others are based on cutting-edge psychology and neuro-science research on what makes humans act.

We’re not as rational as we like to think! This means personal stories work better than hard numbers. Even rights critics may respond to messages that focus on shared values.

Some points are obvious but bear repeating: you need enough resources to do good work.

A few may be controversial. Does your advocacy focus entirely on minorities? It’s time to relate to the general public, as well.

Another one that might trigger resistance: you may not be your organisation’s best messenger – make the effort to find a more authentic one.

Ramia Chaoui, influential YouTuber, very much personifies that advice. She shared her own story about the hurdles she encountered when looking for an internship and then a job. Ramia also presented one of her videos, which offer a “window to a Spanish Muslim girl’s life”.

She also showed an example of daring to use authentic messengers - such as a two-man team of edgy vloggers who spoke to youth in their ‘own street language’ about discrimination in hiring.

She noted that the effort was essentially about spurring a positive, national conversation.

That conversation began with personal stories from people for whom much was at stake. It also appealed to people’s most dearly held values - such as being loving, fair and inclusive.

Thomas Coombes, Amnesty International’s Deputy Director of Communications, spoke about how insights from neuroscience convinced him to embrace positive narratives.

“People are exhausted by stories of disaster and suffering,” he noted.

Communications steeped in hope, by contrast, give people a reason to be part of something: “Show people the dream – and it starts to become reality.”

It is also clear that you need to repeat messages for people to remember them. With that in mind, we’ve prepared a set of flip-cards on the 10 keys for Forum participants to take home.

A separate booklet (available online) fleshes out the main points made. It also gives examples of communications that got it right, shortcuts to helpful resources, as well as crucial dos and don’ts.

FRA will also publish an online tool incorporating the 10 keys, as well as additional material, late next year.

Don’t want to wait for more? Check out our summary of the various meetings.